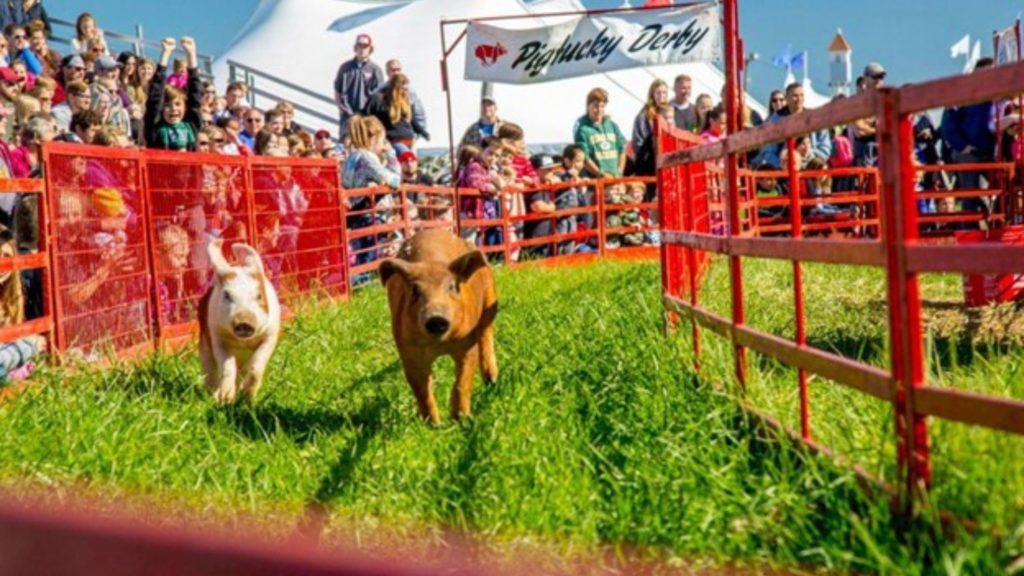 Fall in Minnesota = breathtaking scenery, pumpkin-flavored everything, sweater-weather, and football. Here are seven fun activities to make the most out of the short Minnesota autumn.

We recommend Sever’s Fall Festival in Shakopee, Minnesota. They have one of the largest corn maze’s corn pit, jumping pillows, obstacle courses, pumpkin blasters (yeah crazy fun) zip lines, exotic petting zoos, animal races, and much more. And this festival is one of Minnesota’s original fall festivities as it started in 1997. Kids 3 and under can enter free, everyone else pays a $17.00 entry fee. Sever’s is open now until October 31st.

Octoberfest is a German holiday that first came to history when Prince Ludwig married Princess Therese of Sachsen-Hildburghausen on October 12th, 1810. It was famous for the mass consumption of beer and a two-week-long party. As a result, it became a tradition that Minnesotans have happily adopted.

Minnesota local Bauhaus Brews Labs will be celebrating their 17th annual #Schwandtoberfest starting this Saturday 9/25. This will be a free event with live music from @vivaKnievel and food from @Animalesburgerco and @gerhardsbrats. For more Oktoberfest events in Minneapolis check out this blog post.

Minnesota is famous for our die-hard Vikings fans. The Minnesota Vikings is an American professional football team that plays in the National Football League (NFL). Their home venue is the U.S Bank Stadium, in downtown Minneapolis. You can take the light rail to any of the home games. Or you can drive there and throw a tailgating party (bring your own food and booze) up to five hours before the game starts at the designated tailgating parking area. Some go to see the match, some go to see the cheerleaders.

If American Football is not your jam, then you should check out our famous Minnesota United FC Soccer team. Minnesota United is an American professional soccer team that plays in the Western Conference of Major League Soccer. They play at the Allianz Field in St. Paul. The soccer matches consist of two 45-minute halves, with a halftime break of 15 minutes. They say the fans are friendly, have a community atmosphere and they even sell tacos and tortas!

Minnesota’s fall leaves turn colors from north to south, starting in mid-September to early October. Scenic 61 is a famous route with epic colors alongside Lake Superior, which is one of America’s largest Lakes. HWY-61 , Duluth to Grand Portage, is a very popular route to enjoy the fall colors. This relaxing drive overlooks yellow aspen, birch, and red scarlet maple trees. You can also find comfortable lodging in the area such as the Lutsen Resort.

You can blame – or thank (wink-face) – Millennials for starting this trend in 2007. The party consists of a large meal shared around friends just like thanksgiving but, instead of family, you get together with your favorite amigos. You can serve food similar to thanksgiving (turkey, mashed potatoes, pies, and anything pumpkin flavor). Friendsgiving occurs either a week before or a week after actual thanksgiving. It’s a great way to socialize and show gratitude for the friends in your life.

National Hispanic Heritage Month is observed from September 15 to October 15, by celebrating the histories, cultures, and contributions of American citizens whose ancestors came from Spain, Mexico, the Caribbean, and Central and South America.

This month is significant as many Latin American countries celebrate their national independence during this period. Including Nicaragua, El Salvador, Guatemala, and Costa Rica on September 15, Mexico on September 16, Chile on September 18, and Belize on September 21.

Dia De Los Muertos (Day of the Dead), not to be confused with Halloween, is a two-day holiday widely celebrated across the world that reunites the living and dead. Families create ofrendas (Offerings) to honor their deceased family members. The offerings are believed to encourage visits from the land of the dead as the departed souls hear their prayers, smell their foods and join in the celebrations!

Check out our events calendar for local celebrations such as the annual Festival de las Calaveras (Festival of the Skulls) in Minneapolis or the Day of the Dead party at La Doña Cervecería.

Find awesome listings near you!